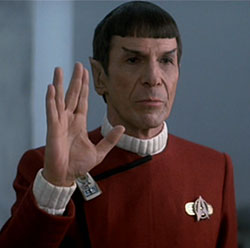 Friday February 27th 2015 will be the day that Cultural Icon Leonard Nimoy, the famous actor from the original Star Trek TV (Television) series passed away. His wife, Susan Bay Nimoy said that Leonard’s cause of death was end-stage chronic obstructive pulmonary disease. Leonard Nimoy play the famous “Mr. Spock” on the iconic original Star Trek TV series from the 1960’s as well as in several Star Trek movies and voice appearances in a few video games as well.   Leonard Nimoy was 83 years old and he will be missed by many, many people, including his fans from around the world. One key and very notable person who will miss him is his close friend William Shatner, the famous actor who played Captain James T. Kirk in the original Star Trek series with Nimoy.   In my mind and the mind of countless people around the world, Leonard Nimoy played the role of Mr. Spock in his Star Trek roles better than anyone else could have. His way of digging deep down and portraying Mr. Spock as a very cold, emotionless and logically thinking character was just perfect. However in real life Leonard Nimoy was not like that at END_OF_DOCUMENT_TOKEN_TO_BE_REPLACED