Congratulations to the New England Patriots!

The lucky people who saw this years NFL Super Bowl, Super Bowl XLIX (49) between the New England Patriots and the Seattle Seahawks saw one of the most exciting Super Bowl’s in recent history. Most NFL Super Bowl games are either a blowout or are very slow seeming like both teams are afraid to do something wrong. This NFL Super Bowl started out like it was going to be a slow one but as the game went one, it got better and better, leading up to a finish fitting for a championship football game.

The first quarter was slow and although Tom Brady and the New England Patriots were able to move the football a little, the first quarter ended with in a 0-0 tie. The Seattle Seahawks just couldn’t seem to get their offence fired up, good thing for them that their defense kept them in the game. The second quarter had a lot more action and the second quarter ended in a 14-14 tie. Tom Brady’s first touchdown pass of the game to wide receiver Brandon Lafell is the score that broke the 0-0 tied game.

Tom Brady, not wanting to lose his third NFL Super Bowl in a row (Previous 2 were lost to the New York Giants) was a man on a mission. He quickly marched the Patriots down the field to score a touchdown with a TD (touchdown) pass to Danny Amendola. Then after the Seattle Seahawks couldn’t do anything in their possession following Brady’s touchdown, it was time to put the ball back into Tom Brady’s hands once more. Brady then marched the New England Patriots down the field and scored another touchdown with a Brady TD pass to Julian Edelman. 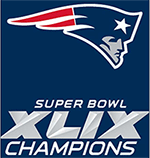 Though the New England Patriots, led by their veteran and future Hall of Fame quarterback Tom Brady won Super Bowl XLIX, everyone who watched was a winner. This years NFL Super Bowl, although started slowly, was a great game and one that will be remembered as one of the more exciting Super Bowls ever. Tom Brady also won the NFL Super Bowl XLIX MVP (Most Valuable Player) award, Brady’s third.

Congratulations to the New England Patriots on winning their fourth NFL Super Bowl. Everyone else, maybe next year will be your year to claim a Super Bowl title.

Do you have a question or comment about this article? If so, please leave me a reply at the bottom of this page.